AMARRE A residency programme for artists in exile in the Mediterranean 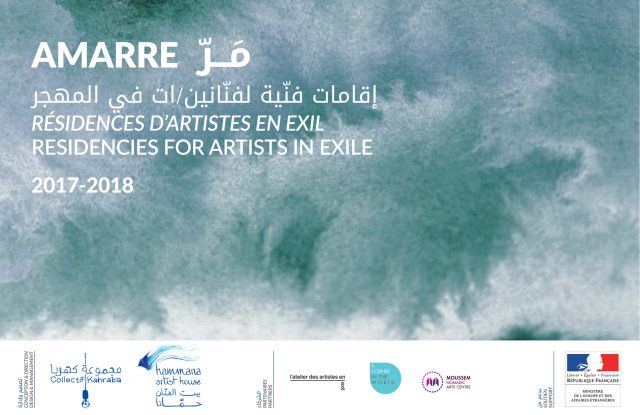 We have the pleasure to announce the winners of the AMARRE residency program :

These artists will reside during two weeks in the agency of artists in exile in order to develop their project, before presenting it in public.For the first edition of this residency program, the aa-e will help and accompany the selected artists.
Karam al Zouhir’s first residence will take place from 26 December to 12 January 2018. The second, with Mohammed al Rashi and Wael Qadour, will take place from 26 December 2017  to 12 January 2018.

Presentation
AMARRE, A residency programme for artists in exile in the Mediterranean, a programme designed and directed by Collectif Kahraba /Hammana Artist House, in partnership with L’Atelier des Artistes en Exil (France), A corner in the World (Turkey) and Moussem (Belgium), and Supported by the French Ministry of Europe & Foreign affairs.

Amarre, in French, means mooring line : rope, cable or chain by which a boat is attached to the shore or to an anchor. AMARRE aims to connect forcibly artists in exile to their host communities. It is a residency programme that provides a safe working space for the selected artists to develop their projects and share them with the local audience, as well as connect them to the professional networks in their new environments.
Each local partner will host and accompany the selected artists in displacement in the respective countries with the perspective of supporting a culture of openness, free expression and coexistence. For its pilot edition, AMARRE takes place in three different countries: Lebanon, Turkey and France.

Winners of AMARRE Programm
The agency of artists in exile, partner of this program, has the pleasure to welcome Karam al Zouhir for his project Another Country, as well as Mohammad al Rashi and Wael Qadour for their project Chronicle of a city we never knew, winners of AMARRE programm.

Another Country
Karam al Zouhir
Karam al Zouhir is a Syrian musician, graduated in Music Education at the University of Homs, Syria, and in Musicology at the University of Strasbourg. He is also a music teacher. His project Another Country is a musical show for children based on a text written by migrant children and formatted by writer Claire Audhuy. This text retraces the journey of a migrant child and his mother to reach Europe. It release the issue of exile from a child’s perspective. For his project, Karam al Zouhir wants to make a musical and sound piece, based on recordings of children telling their dreams and based on musical compositions.

Wael Qadour (1981) and Mohammad Al Rashi (1970) are Syrian artists graduated from the Higher Institute of Dramatic Art in Damascus. Wael Qadour is an author, playwright and director. He has published 5 plays since 2007. In addition to his artistic activity, he is also editor-in-chief of the online platform Cultural Policy in the Arab Region (ARCP) and co-founder of the Ettijahat Independent Culture network.
Mohammad Al Rashi is an actor, musician, composer and director known in Syria as an actor for cinema, television and theatre at the National Theatre. He has also taught drama at several prestigious institutions in the Arab world. Together, they work on the production of Chronicles of A City We Never Knew, wrote by Wael Qadour, with Syrian actors exiled in France and Germany.