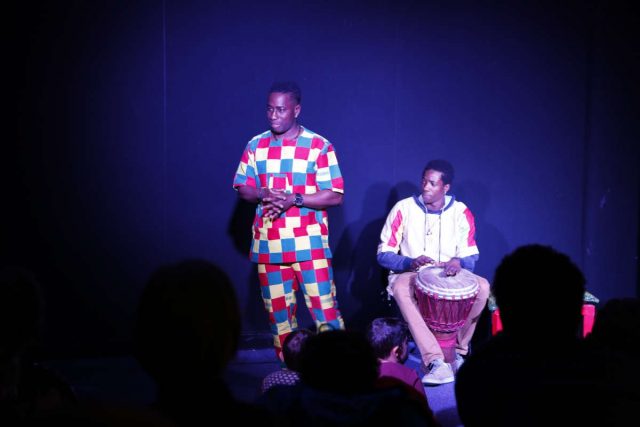 « Over there, everything was extreme and life was incredibly difficult. When you were cold, you died of cold. When you were hungry, you died of hunger (…) I used to dream of lyrics and in the morning, I would write them down as if they were dictated to me. » Yacouba Konaté was studying for a BTS in engineering when the rebels entered Daloa (Ivory Coast). Forced to flee, he survives the inhuman conditions on his journey through music and song. « What I learned in prison was: the more you give to others, the more chance you have to survive. It’s not a question of physical strength, but of your mind and patience. Patience is hope. »

A terrible, initiatory and revelatory journey which he succeeds in telling and inscribing on the body of le jeune Yacou. Accompanied by Waly Saho’s percussions, le jeune Yacou crosses through a contemporary crisis, a time of truth, where two men on stage surrounded by children and adults, share, transmit and heal. « Le jeune Yacou speaks for me. It’s what I call my ‘natural destiny’. (…) There are things that I could never talk about before, that now come out with my tears. Sometimes, the children in the audience cry with me, sometimes we dance, sometimes we sing.»

Originally from the Ivory Coast, Yacouba Konaté flees his country, and suffers through cruelty, camps, slavery… after many years in exile, he arrives in France and finds the strength to get back on his feet through song and music. In France, he writes the musical accompaniment for the film Choucha (of which he is a protagonist) by Djibril Dialo and Sophie Bachelier and is welcomed by l’Atelier des artistes en exil (a unique structure in France that supports artists in exile and offers them a place to create). This place of ‘refuge’ allows him to write and sing about his journey and to produce himself in concert. In 2017, he founds the music group Wary with, amongst others, Waly Saho.