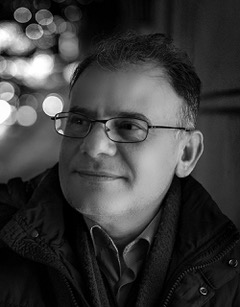 Ziad Harb was born in 1965 in Latakia, Syria, and he is a music composer. After he graduates from the Higher Institute of Music of Damascus, he begins his career as a flutist, then becomes choirmaster of the National Zenobia Folk Arts Orchestra of Damascus, Syria. He also plays the oud and the trumpet. In 2006, he founds the Ninawa music institute in Jaramana. He composes and arranges several musical pieces for television, theater and radio. He leaves Syria in 2013 and goes to Turkey and France afterwards, where he works as a composer and sound engineer at Radio Rozana in Paris. He is a member of the agency of artists in exile.